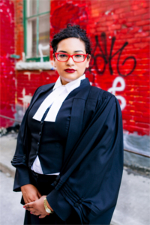 As we pass the half-year mark of legalization, we’re sitting down with cannabis lawyer, Caryma Sa’d, to chat about the ins and outs of cannabis law!

Caryma Sa’d is a lawyer practicing in the areas of criminal and landlord/tenant law. She has a budding cannabis practice. Her firm works closely with cannabis activists and entrepreneurs, as well as individual patients and recreational consumers.

Caryma articled at a top-tier Bay Street litigation boutique where she had the opportunity to work under the direct tutelage of some of Canada’s leading litigators. She was selected for a secondment to one of the Big Five banks.

Prior to attending law school, Caryma interned with a prominent human rights organization in India. She wrote and illustrated a simplified guide to domestic violence legislation, which has since been circulated to thousands of at-risk women across the country.